The Fountain of Life 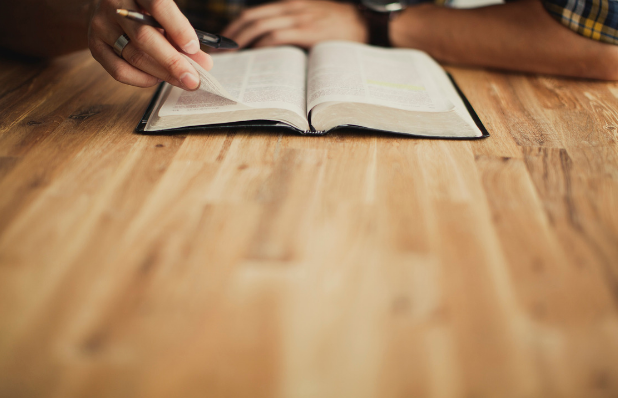 As I mentioned in my sermon introduction this week, I actually wrote (and rewrote) my lesson three times.  Perhaps the hardest part of preparing a sermon isn't deciding what to say, it is determining what not to say.  Often times a lot of good content gets left behind on the cutting room floor for the sake of time.  The goal of this blog has always been to supplement the sermon content with some additional thoughts that take us even deeper as we contemplate the text and the associated lesson.  With that said, I'd like for us to think about one aspect of God's word that I wasn't able to cover in the sermon.  That is, the creative power of God's word.

In Genesis 1, the story of creation begins with empty darkness.  There was only God.  Then, God spoke and by the power of his word, things that formerly had not been, began to take shape and substance.  First, light and dark (day and night); then sky and sea; then dry land; then vegetation; then the sun, moon, and stars; then the living creatures of sea, air, and land; and finally, man.  All of these things exist through the creative power of God's word.

However, the story of God creating through his word doesn't begin and end in the first two chapters of the Bible.  It is a recurring theme throughout.  God commands Noah to build an ark to preserve for himself a remnant of mankind after he judges the whole earth through the flood (Genesis 6-8).  God callsAbram out of Ur and promises to make him the father of a great nation through which he will bless the whole world (Genesis 12).  God prescribes to Moses on Mount Sinai the Law by which his people are to live and thrive (Exodus 20).  God promises an eternal kingdom for his people through the lineage of King David (2 Samuel 7).  The prophets speak blessing and judgement upon the people by the power and authority of the Holy Spirit.  Finally, Jesus and his Apostles after him, proclaim the good news that gives new life to those who were formerly dead in their sins.

God's word is above all things, his power to create and to give life.  This is why the Apostle John in his gospel writes of Jesus, "And the Word became flesh and dwelt among us, and we have seen his glory, glory as of the only Son from the Father, full of grace and truth" (John 1:14).  Everything that God's word accomplishes is made manifest in Jesus (creation, knowledge of God, conviction of sin, salvation, etc.).

When we neglect God's word, we cut ourselves off from its life giving power.  Jesus says without his bread and his water, we will perpetually suffer from persistent hunger and thirst (John 4:13-14, John 6:35).  However, spiritual malnourishment and dehydration are just the tip of a much larger iceberg.  This is what we can see, but there is much more that lies hidden beneath the surface and threatens to sink us like the great vessel, Titanic.

The excellent Bible teacher, Jen Wilkin writes in her book, Women of the Word(also a great read for men), “We must make a study of our God: what he loves, what he hates, how he speaks and acts. We cannot imitate a God whose features and habits we have never learned. We must make a study of him if we want to become like him. We must seek his face.”  Scripture teaches us that Christ's purpose in salvation isn't to make much of us, but rather to make much of him.  As the Apostle Peter writes in his first epistle, "But you are a chosen race, a royal priesthood, a holy nation, a people for his own possession, that you may proclaim the excellencies of him who called you out of darkness into his marvelous light" (1 Peter 2:9).

Our conformance to the image of Christ, our re-creation into his likeness by the power of his word, reflects his glory to the ends of the earth and beyond, and fulfills the purpose for which we were set apart.  There are so many reasons why our devotion to studying God's word is so incredibly important for us.  Those listed in the lesson this week and the ones we have just discussed only scratch the surface.  If I had but one prayer with which to make my petition to God for the people of The Journey, it would be that he might grant us an unquenchable desire to come to his Word.  It is truly a fountain of living water!

Part 9 - Delighting in God Through His Word

Questions discussed in this sermon

1.  How can we know God?
2.  What role does the mind play in our relationship with God?
3.  Why is studying the Bible so important to our spiritual health and our worship?

Study the 10 Commandments with us!

The Gospel: A Message of Hope

The Good News of Jesus